Our Justice4Families Founder, Jillian McLeod, is now a Member of a brand new Road Safety Sub Committee within the Safety Advisory Committee for the City of Brampton! We are so thrilled and proud for Jillian to have been invited and to have accepted to sit on this very important Committee!! #JillianRocks

Peter Simms has given up his right to a Bail Hearing
He is remanded into custody ongoing.

Charges were laid after a deadly crash on Hurontario Street near Mineola Road in Mississauga just after midnight on Oct. 10, 2020. After Simms was arrested, Peel Regional Police released that Simms had two prior convictions for impaired driving.

Jag’s father, Rob Brar, who held a sign which read, “Minister Lametti, what if it was your family?”

He said he feels strongly that laws need to changed and appealed directly to federal Justice Minister David Lametti to make sentences stiffer for impaired drivers.

“Enough is enough. First time offender: one year in jail, five-year driving ban. Second offence: 10-year driving ban, five years in jail. This is murder. They may not call it murder, but a kid died,” Brar said. – Source: Global News

BRADY ROBERSON – Trial Will Be Done In 3 Stages

The driver charged in relation to a fatal crash in Brampton in June that claimed the life of a 37-year-old mother and her three young daughters is now facing four additional charges because police say he was impaired by drugs.

There will be a Pre Trial Judicial Hearing (Private) on April 20, 2021 The next court appearance will be April 23rd via video Courtroom 204 2:15pm #Justice4Ciasullos #We Wait.

We remember beautiful Karli, single mother of 2 small children, as we advocate for harsher laws and stricter penalties for Impaired/Dangerous drivers. Court date is pending for the accused.

We remember these 4 beautiful innocent souls as we advocate for harsher laws and stricter penalties for Impaired/Dangerous drivers.

WOMAN KILLED WHILE WALKING HER DOG

We remember Louise as we advocate for harsher laws and stricter penalties for Impaired/Dangerous drivers.

We at Justice 4 Families advocate for changes that need to be made to the Criminal Code to Strengthen Laws, Increase Sentences, and Increase Parole Eligibility periods in relation to serious driving convictions including Impaired, Dangerous Driving & Stunt Driving in Ontario, Canada. 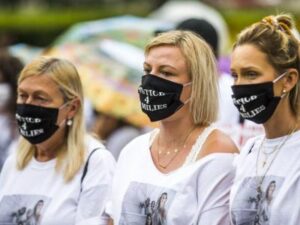